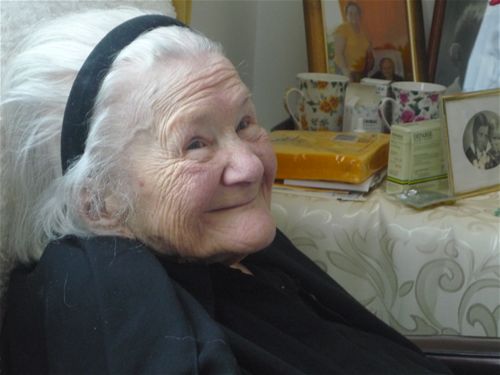 What ages were the children Irena saved?
The children were all ages, plus Irena and the Zegota network saved adults also.

Was Irena Jewish?
No, Irena was Roman Catholic, but many of her lifetime friends were Jewish.

Why wasn’t the story of Irena Sendlerowa known?
After World War II the communists took over Poland and branded Irena (for her underground activity and the saving of Jews) a Fascist. When communism fell in Poland, Irena was elderly and the story had been suppressed many years. This is the major reason and there are other lesser answers to this complex question. Importantly, Yad Vashem recognized Irena in the 1960’s.

When did Irena’s story become more widely known?
In 2001, the Life in a Jar students, Mr. Conard, and several adults went to Poland, to meet Irena and interview many. The Polish Daily News, USAToday, CNN and others covered the story. Irena’s name has increased one hundred fold on the Internet, and in writings around the world. The students continue performing Life in a Jar around the world, and continue working with press outlets to share the story of Irena Sendler.

How many times have the students performed ‘Life in a Jar?’
How may we get a presentation in our area?
As of January 2020, the students have presented 375 times, in the U.S., Canada and Poland. Visit the Contact Us page on this web site to ask about presentations. You may also visit the ‘Host a Presentation‘ page which tells about some requirements for the presentations.

Where are the lists?
Irena gave the lists to Zegota officers shortly after the war. Copies were made, but connecting was very difficult, due to the small number of adult survivors in Poland. Adolph Berman, Director of the underground Zegota, took the lists to Israel. He passed away many years ago. A search is on for what might remain. The Life in a Jar students have about 650 names they have found. Irena continued trying to make contact with the children and did so in the late 1940’s, even in the chaos that followed the war. The number of names in the jars was far less than the 2,500 children hidden.

Which child, of those Irena saved, was she most in touch with?
Irena loved all the children she saved, but Elzbieta Ficowska helped with Irena’s care for some time and was very close to her. Elzbieta was saved by the Zegota at 5 months of age. Her story can be seen under The Project pull-down and the Sendler Family section.

How many times have the Life in a Jar group visited Poland? What were Irena’s last words to the group, on May 3, 2008?
The Life in a Jar group have taken six trips to Poland, with at least two visits with Irena each time. Her last words to the Life in a Jar cast on “May 3, 2008 “You have changed Poland, you have changed the United States, you have changed the world (by bringing Irena’s story to light, Poland has seen great changes in Holocaust education, in the perception of the time and have provided a grand hero for their country and the world). I love you very, very much.” 6 trips, plus a tour to Irena sites with 32 people in the summer of 2017.

What impact has the Life in a Jar presentation had, in numbers?
The Life in a Jar cast has presented in 27 states and three countries. The web site, in a period of six years, has had 2 million visitors and 55 million hits. The Life in a Jar study guide and DVD of the play has reached over 1 million students in over 4000 schools. Around 3,000 media stories have covered the project.

What about the number of 2,500 children saved?
This number is from primary sources of the time, although some say the figure was closer to 2,000.

What are the girls who founded the project doing now?
How can we contact them?All three girls are married and have graduated from college. Megan Stewart-Felt is working at the Lowell Milken Center for Unsung Heroes in Fort Scott, Kansas. The LMC is an educational foundation developing exciting history projects around the world, using unsung heroes to teach respect of all people. Sabrina Coons-Murphy and Elizabeth Cambers-Hutton are both teachers today. All three continue to share Irena’s story through presentations.

Were many of the children reunited with their parents?
Sadly, the answer is no, the vast majority of the parents died at Treblinka.