'Life in a Jar' Book

A powerful story of the Holocaust and more... 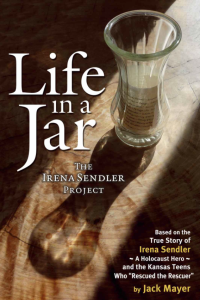 Life in a Jar: The Irena Sendler Project by Jack Mayer is a powerful story of the Holocaust and more. First, it is the story of the extraordinary Irena Sendler, the great rescuer of Warsaw. It is also the inspirational story of students from Kansas, each carrying their own painful burden, each called in their own complex way to the history of a Catholic woman who knocked on Jewish doors in the Warsaw ghetto and, in Sendler’s own words, “tried to talk the mothers out of their children.” Inspired by Irena Sendler, they are living examples of the power of one person to change the world and models for young people everywhere.” The proceeds are used to care for Holocaust rescuers who are still alive. There is a discount available if purchasing the book in bulk amounts. Please email conardnorm@gmail.com for more information.

Order 'Life in a Jar' Books

LIFE IN A JAR: The Irena Sendler Project has won several literary prizes:

Life in a Jar: The Irena Sendler Project reviews:

“I have always avoided feeling the pain of the Holocaust until I read Life in a Jar. I let myself cry through many pages, horrified at how human beings can treat other human beings. By the end, I was crying for a different reason–how Irena Sendler and some students and Jack Mayer made a difference, living and telling this story. I would recommend this to anyone who wants to feel the worst and the best of what we human beings are capable of doing and being.”

“Not at all my usual type of read, but I was riveted. Even researched Irena further. I had a ‘book hangover’ after it. Couldn’t find anything that was going to be as good or move me as much. What an insipiring woman!”

“Would love to see this book as part of every school curriculum. A great reminder of what just one person can do, in the face of evil.”