For scheduling information, please send an email to Mr. Conard @ conardnorm@gmail.com or submit a request on the contact page.

Megan Felt will be speaking at the 2020 Holocaust Commemorative Service in Topeka, KS. This is the singular government sponsored memorial in Kansas for the victims of the Holocaust. Founders of the American Gathering of Holocaust Survivors and Their Descendants recognized that the lives of citizens are vulnerable to the power of elected officials. Their years’ of many efforts resulted in the government backed Yom HaShoah observance. Kansas’ clergy, lawmakers, and students will be participating in the service. Holocaust survivors, World War II veterans, and second generation sons and daughters will be recognized.

This site uses Akismet to reduce spam. Learn how your comment data is processed. 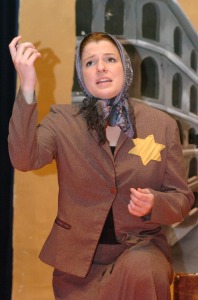 ANNOUNCEMENT:  BE WATCHING FOR NEW PERFORMANCES IN 2021