Keep up with the project...

May 12th is a day of remembrance: Irena Sendler passed away on May 12, 2008.  Even though nine years have gone by since her death, her legacy is growing stronger and stronger. This story shares the power of one person to change the world. It is more important than ever before.  Holocaust education and the need to “never again” allow this kind of tragedy to happen is so significant.
Irena’s light continues shining in the darkness. We remember her wonderful, caring personality and her concern for people in this world. She was a giant of our time.
Also, Happy Birthday to Megan Felt, one of the founders of Life in a Jar, on May 12th.

75 years ago today, Irena Sendler and her network were rescuing children and adults from the Warsaw Ghetto.

You must come and see our new Irena Sendler Exhibit at the Lowell Milken Center for Unsung Heroes in Fort Scott, Kansas. We had visitors this week from Chicago. Their local college taught a class on Life in a Jar: The Irena Sendler Project!! We have no idea how many times this happens across the country. The legacy of Irena Sendler goes on and on.

We salute the Pensacola, Florida Jewish Federation and Pensacola State College for hosting Life in a Jar this past weekend. The audiences were enthusiastic and have written a number of emails about this thrilling story. We thank Rick and Susie Gordon for hosting us, plus from the college, a big thank you to Kelly Ryan and Don Snowden.
Our Poland 2017 tour of Irena sites in Poland has been filled. We do have a waiting list if you are interested in putting your name on the list.
Plan your summer vacation in Fort Scott, Kansas. See our Center and Irena’s life, plus the Fort Scott National Historic Site, Gordon Parks Museum, National Cemetery #1, brick streets, Victorian Mansions and more.

Do you have friends in or near Pensacola, FL? Life in a Jar will be performed there in a couple of weeks!

Life in a Jar in Pensacola, Florida

Life in a Jar will perform on April 1st, Saturday, in Pensacola, Florida.The performance will be in the auditorium at Pensacola State College, 1000 College Boulevard, Pensacola, Florida 32504. This performance is open to the community. Contact Person is Rick Gordon, jrgordonfla@yahoo.com, 687.852.3368

April 1 @ 7:30 pm
Life in a Jar will perform on April 1st, Saturday, in Pensacola, Florida.The performance will be in the auditorium at Pensacola State College, 1000 College Boulevard, Pensacola, Florida 32504. This performance is open to the community. Contact Person is Rick Gordon, jrgordonfla@yahoo.com, 687.852.3368
April 2 @ 2:30 pm

Life in a Jar will perform on April 2nd, Sunday, in Pensacola, Florida. The performance will be in the auditorium at Pensacola State College, 1000 College Boulevard, Pensacola, Florida 32504. This performance is open to the community. Time is 2:30pm. Contact Person is Rick Gordon,jrgordonfla@yahoo.com, 687.852.3368

One hundred and seven years ago today, Irena Sendler was born.

She changed the world and proved that one person can make a difference.
She and her network did courageous work, seventy years ago this spring and summer.
We remember Irena and her spirit every day but especially today. Her courage and valor shows us that we must all make a difference. It is our responsibility to make the world a better place.
We salute this incredible woman.
Our journey this summer to see the ‘Irena sites’ and much more in Poland, is almost full.
We have a couple of spots left for those interested. Trip information can be emailed to you.
Life in a Jar will be in Pensacola, Florida in April.
If you haven’t seen the new Irena Sendler exhibit at the new Lowell Milken Center for Unsung Heroes, you are missing a powerful exhibit.

So many of you have said you would like to go to Poland with Mr. C. and Megan Felt to see the Irena Sendler sites.

HERE IS YOUR OPPORTUNITY!

THIS IS A LATE START, BUT WE ONLY HAVE 40 OPENINGS! SO MANY HAVE ASKED ABOUT A TRIP LIKE THIS. WRITE US WITH QUESTIONS TODAY.

Chandler, Arizona, thanks for the wonderful venue and audience. Adrian Bendick was exceptional in her preparation and providing large audiences. We have received many emails about the presentations. As always, a big salute to the Life in a Jar performers.

We also thank the City of Chandler for the gorgeous venue, the East Valley Jewish Community Center and the Greater Phoenix Jewish Film Festival. The Honorary Polish Consul from Los Angeles and an Arizona State Senator were also present to share words and the story of Irena Sendler.
As a special part of the program, we had Lyn Munn (daughter of unsung hero, Bill Moore) in the audience, plus Cindy Smith (niece and great granddaughter of unsung heroes Gene Shoemaker and Adam Shoemaker) also in the audience.
On January, 20, 1942, 75 years ago today, Reinhard Heydrich, Himmler’s second in command of the SS, convened the Wannsee Conference in Berlin with 15 top Nazi bureaucrats to coordinate the Final Solution (Endlösung) in which the Nazis would attempt to exterminate the entire Jewish population of Europe, an estimated 11 million persons –  Never Forget

As the year draws to a close, please remember the Life in a Jar Foundation as a 501(c)3 non-profit when you make your final donations for 2016.

To support the work of the Life in a Jar: Irena Sendler Project please donate on our website!

Irena Sendler walked into the Warsaw Ghetto and took children into her arms and rescued hope. Please join us in sharing the beautiful and courageous story of Irena, who in the dark hour of the Holocaust was a light.

To teach respect regardless of race, religion, or creed has always been our passion, and now we are developing hundreds of history projects at our Center with students and teachers around the world.

This amazing journey is only possible with your continued support!

***A national foundation will match any gifts donated to the Center. ***

We wish a Merry Christmas, a joyous Hanukkah, and a wonderful Festival of Lights to our many friends around the world! May your home be blessed with joy and peace during this season. 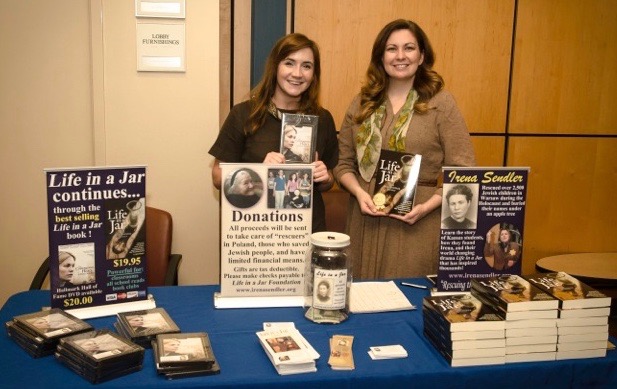 Happy Thanksgiving from the Life in a Jar family. We wish you the happiest greetings this Thanksgiving season.

May you and your family enjoy these holidays and share the joy with others. As the leaves of autumn fall, we are thankful for everyone in the very large Irena Sendler family (all those who are sharing her story with the world.)
We try to share information on Irena Sendler and her network at various times. Our new exhibit at the Lowell Milken Center for Unsung Heroes is getting rave reviews with its Irena exhibit.
Throughout the years in November, Irena experienced a great variety of emotion and experience.
For example:
1939: The German invasion was mostly complete, with scattered fighting all over Poland. Irena watched with horror with underground reports that German Operation Tannenberg in Bydgoszcz, Poland saw the invading troops executed 600-800
Polish/Jewish citizens.
1940: The Warsaw Ghetto was established in October and November of this year. Irena would later say she had the greatest of fears for her Jewish friends. She had already started to organize her network and already started to hide some Jewish families.
1941: The Warsaw Ghetto was becoming a place of total horror. Starvation and disease was everywhere. The rescues had already started by Irena and her network.
1942: Most of the children and adults rescued by Irena and her network were rescued in the early summer of this year. Now the tremendous job of hiding them, moving them from home to home and making sure of their security in convents and orphanages, was of upmost importance.
1943: Irena was captured by the Gestapo in October and would spend a horrible November in Pawiak Prison.
1944: Irena was bribed out of prison and by November of this year, began to see light in the darkness. She was in hiding with Stefan (the Jewish man she would later marry), and the Allies were marching across Europe.
1945: The war was over and now ‘the lists.’
« Older Entries
Next Entries »