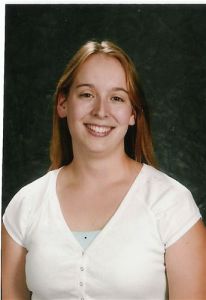 Sabrina is from a military family and moved almost every 2-3 years, until she was a junior in high school. Right before her junior year of high school her family moved to Southeast Kansas. She attended a small high school in Uniontown, KS. Growing up she was always extremely shy and quiet because she was always the new kid, it seemed to all change after she became part of this project. She remembers Mr. Conard asking her after class one day if she would be interested in working on a project for National History Day. At the time she had no idea what we were going to do for a project or how it would take on a life of its own. She has had the opportunity to visit Irena in Poland twice. As of now she presents all over the Midwest telling the story of Irena Sendler. Recently she presented to a large group of book clubs in Southern Missouri. Sabrina is the oldest member of the original students, being 34.